Americans are self-proclaimed experts when it comes to solving our own problems. “God helps those who help themselves” is a common misconception shared by many people, including countless well-meaning believers. That doesn’t make the statement accurate, however. If that statement were true, I would have been able to get a running start toward salvation. I couldn’t. If it were true, I might have met my Savior halfway. I didn’t. God helped me when I was literally incapable of helping myself. Completely lost in my transgressions, I was helplessly and hopelessly desperate. The truth is that God helps those who are completely incapable of helping themselves. And that is precisely where we find ourselves as a nation. We are clearly incapable of helping ourselves, yet we remain adamant in our collective refusal to admit our helplessness. 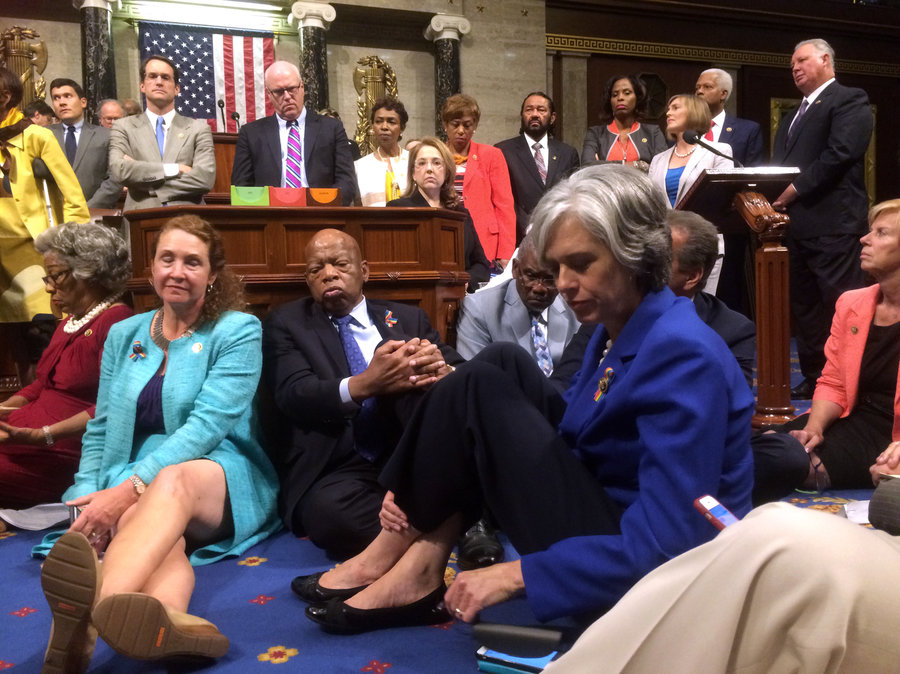 Solving our own problems took on a new meaning this week when members of Congress organized a sit-in. What a novel, if misplaced, solution. Hunger strikes and sit-ins work if your name is Gandhi, Mandela, King, or Parks, and only then if the cause is worthwhile. Strangely, none of those icons is pictured above. The educated adults pictured here sat on the floor of the House, like children who didn’t get their way. Social icons protest against the actions of oppressors. Irrelevant progressives protest against inanimate objects like guns. Gun control is a hotly debated topic once again. The intensity of that discussion spikes after any mass shooting, and we all know what tragically happened in Orlando recently. Strike while the iron is hot, I suppose. Nonetheless, I wonder how many of us consider the hypocrisy necessary to sit down in opposition to guns and then stand up in support of abortion.

The gun control sit-in is possibly the greatest example of organized hypocrisy I have ever encountered. Most of these same legislators hypocritically support the abortion industry. In fact, some of these elected officials work tirelessly to mandate that our “killing clinics” are lethally efficient. Are the methods of execution or the age of the victims really the determining factors in our appetite for murder? Homicide has never known the levels of efficiency that legalized abortion espouses. Guns, by comparison, are woefully ineffective murder weapons based on units sold vs. units used to commit homicide. Yes, all of the “sitters” pictured are Democrats. But most Republican leaders sat recently, as well…on their hands when Congress voted to fund Planned Parenthood last December through the $1.6 trillion omnibus bill. Make no mistake; abortion rights exist because of non-partisan efforts, in spite of the rhetoric of the right. By God’s standards, sins of commission are no worse than sins of omission.

Consider this. If an abortion clinic is unsuccessful in killing a child, legislators are fit to be tied. Ironically, however, the overwhelming majority of guns are completely unsuccessful in taking lives, but these same elected officials rage against the firearms industry in the wake of every mass shooting. America legislatively promotes the successful murder of more than 700,000 children in the United States each year, and we demand that our methods are efficient. Then we scream from the mountaintops when a madman takes the lives of 49 people with an assault rifle in a nightclub. Where is the screaming for the innocent unborn? Who is sitting-in for them?

Remember being absolutely appalled when 20 precious children were killed at Sandy Hook elementary in 2012? Would we have been equally horrified if these murders happened in a dark and secluded room? Absolutely. What about a dark and secluded womb? Nah. What changed in the seven years between the womb and the first grade classroom that made death by gun more appalling than death by surgical instrument? Changing the context a bit, if the mother of Orlando shooting victim, Cory Connell, had paid the gunman to execute her son at Pulse in 2016, would the loss of life be acceptable? Why, then, would it have been acceptable for Cory’s mother to pay a doctor to execute her son at Planned Parenthood in 1994? Should the type of murder weapon chosen or the age of the victim determine the sanctity of life lost?

Using my tax dollars, Congress currently funds the lethal weapon on the left (an MVA abortion syringe) and then fights desperately to outlaw the (rarely) lethal weapon on the right (a SIG MCX rifle). Only one of the two weapons pictured is used exclusively for homicide, though. The weapon on the left is used specifically to kill millions through premeditated acts performed by medical professionals; the weapon on the right is used to kill hundreds in premeditated acts performed by deranged individuals.  Aren’t legislators fighting the wrong battle? Why aren’t we talking about syringe control? If guns were available through a community organization called Planned Citizenship, would Congress fund them? It seems to work for Planned Parenthood.

We have clearly lost our way as a country. We are starving for moral and spiritual leadership. How long will we continue to deny the inverse correlation between moral rebellion and diminished levels of providential protection? Turning away from God has consequences, and thumbing our noses at the Almighty leads to costly lessons. Here’s the problem—Americans continue to willingly pay those costs. Apparently our mistakes aren’t expensive enough…yet.

Lord, we Americans are incapable of helping ourselves, much less our nation. Even our methods of self-help have now become comical in their tragedy. In our 240-year history, we have never been more desperate for you as a nation. When will you find us participating in the only meaningful sit-in…the one where we are found on our knees in a posture of repentance? Lord, save America because we clearly can’t save ourselves, and forgive us for placing our trust in fallen leaders. You always have been and always will be our only hope.